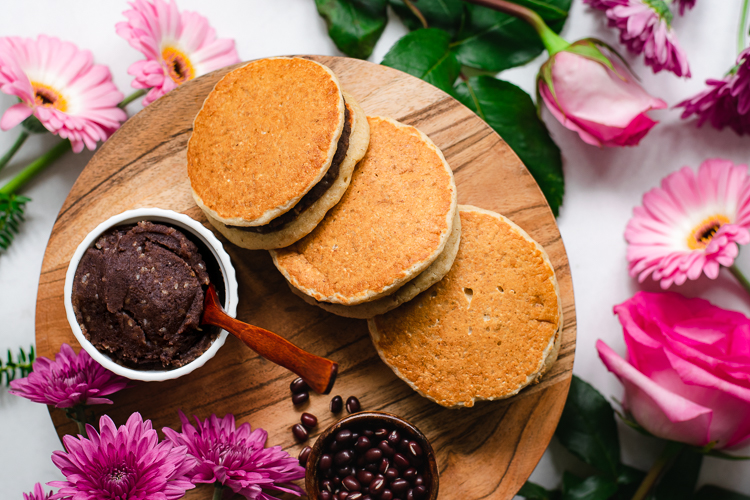 This vegan dorayaki is perfectly fluffy, sweet, and filling, made with oats and naturally sweetened with maple syrup and dates. It’s healthier than traditional dorayaki but still deliciously satisfying.

Dorayaki is a popular Japanese snack made of sweet red bean paste sandwiched between two sweet and fluffy pancakes. The pancakes are very different from American pancakes and more closely resemble castella, a Japanese sponge cake. Unfortunately, it’s very hard to replicate a vegan version of these pancakes since their main ingredient is egg. So I’m not going to lie and say these vegan dorayaki taste exactly like traditional dorayaki, but they are delicious in their own right and are a wonderful vegan substitute.

To make this vegan dorayaki, you need 10 basic ingredients:

The anko can take some time to make, but if you have a pressure cooker it will speed up the process immensely. Just cook your azuki beans on high pressure for 25 minutes and they will become nice and soft. Then blend with dates until smooth and your anko is ready! If you don’t have a pressure cooker, you can make the beans on the stove but it will take much longer and you will need to soak the beans overnight. Alternatively, if there’s an Asian market near you, you may be able to buy pre-made anko. These are typically much higher in sugar though, so I like to make my own since I don’t want my anko to be too sweet.

You can also change up the flavor of your anko by adding things like matcha powder, sesame seeds, cocoa powder/chocolate, etc. I added sesame seeds to mine and it gave it a nice nutty flavor. Pair your dorayaki with a hot cup of tea or coffee and you have the perfect afternoon snack!

The pancakes are also really good on their own or drizzled with more maple syrup and eaten as regular pancakes. I was pleasantly surprised with how fluffy they turned out despite being made with oat flour. But since they’re made with oats, that means they’re totally acceptable for breakfast! It’s like a step up from a regular bowl of oatmeal. And the anko adds protein sooo it’s basically a perfectly complete meal. And if you make it all yourself, you can avoid a big sugar crash and not end up with overly sweet dorayaki.

Check out these other healthy sweets!

I hope you love these dorayaki as much as I do! If you do try it out, don’t forget to tag me in your recreations on instagram @ellielikes.cooking and leave a comment down below letting me know how you liked them. I love hearing from you and am always eager for feedback! Happy cooking 🙂

Disclaimer: This page may contain affiliate links. As an Amazon Associate I earn a small commission if you purchase something through one of my links, but the price remains the same to you. Thank you for supporting Ellie Likes Cooking! 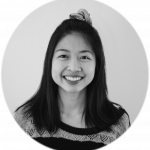 Welcome to my creative outlet for all things food. Here you’ll find simple & tasty plant-based recipes for everyday cooking. Whether you’re vegan or not, I hope you find a new recipe you love!

Sign Up to Receive New Recipes Delivered to Your Inbox Every Week!

Happy Friday! Here’s a photo of a recipe I never